Over the past year we have been bombarded with a combination of pure statistics and percentages on a daily basis from politicians and the media about the extent of COVID in the UK; but did we understand what the specific figures were actually telling us?  For example, a briefing from Nicola Sturgeon announced that 7.2% of the total number of tests on 9th February were positive… what information does that actually give us?  Is that good or bad?   Compared to what?

“Facts are stubborn, but statistics are pliable”.
Mark Twain

Yes, the graphs may show numbers going down and we are left assuming that that is because of the interventions taken.  Or is it just natural variation or seasonality?  Is the frequency of reporting correct?  In other words, do we really need to see everything on a daily basis?  Are we, the public, going to take some kind of action depending on a change from one day to the next or have we just been drawn in to expecting to see figures every single day?

Percentages as a Mask

Some time ago I wrote a short article titled “Lies, Damn Lies and … Percentages” where I looked at the mistakes people make when they use percentages as KPIs.  The message for that article was that the problem with using percentages as markers of performance is that they often mask the real or relevant information in exchange for a ‘palatable’ or useful statistic.  There was an example of this recently in a presentation by Chris Whitty showing a comparison between January and May/June this year of the age distribution of COVID patients in English hospitals.  The graph clearly showed a scary high percentage of under 65s in hospital in May/June. 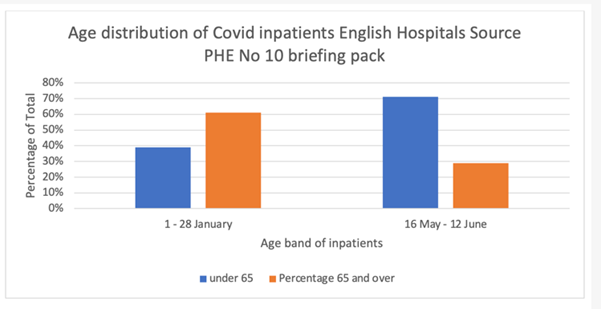 However, when the actual numbers are looked at the picture is very different. 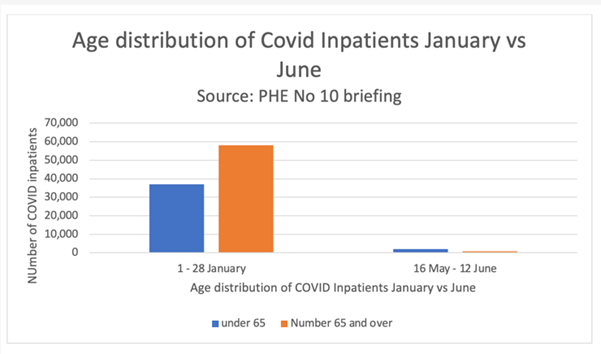 As someone who trained as a statistician and who has worked in extracting information from data for all of my working career, I would say that in order to get the true understanding of what story the data is telling us, two things are critical – understanding the context and the presentation of the data.  With the daily data we were given there was little or no commentary around the context or an explanation for the change.  Everything seemed to be focussed on the numbers and percentages.

“Quantitative stories cannot be told effectively just by throwing numbers at people. Numbers alone—even those that measure something perceived as important—are meaningless unless we present them in context.”
Stephen Few

Providing data without commentary has the same affect in any organisation, for instance when producing regular reports on the progress of the business towards achieving its goals.  It is not enough to just provide a page of statistics either as numbers or in graphical form, and then leave the interpretation of the data to the reader.  Ok, I hear you say – well if the numbers are going up and that is the correct direction of travel, what else do we need to say?  But are they increasing at the rate that will enable us to hit our targets?  Has an earlier intervention had the desired effect?  In fact, do we know the effect that we had hoped to see following an intervention?  If not, what do we need to do next to get back on track?

When providing data to show progress, your commentary should include at the very least:

The graphical presentation of the data is also critical and, in my opinion, should be kept simple to enable the reader to clearly see what the graph is actually telling us – and we do not allow everyone to make their own interpretation.  How many times have you looked at a graph and thought “that looks good, but what is it actually telling me”.

The example below leaves no doubt as to what the message is. 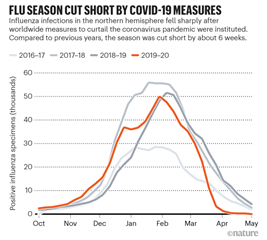 From a graph you should be able to see in an instant what the message is, and in the area of business performance that has to be an indication as to whether we are on track or not.  But we have to be able to see the full picture, not just a small area that suits the presenter.  Again there has been much discussion about graphs provided in a UK Government COVID briefing where only a very small part of the graph was selected – to prove the point that was wanted to be made, not necessarily what the data as a whole tells us. 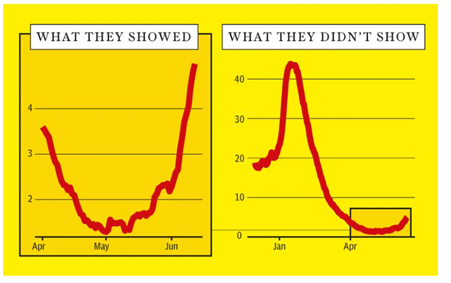 “There are 3 kinds of lies – lies, damned lies and statistics”
Benjamin Disraeli

As a statistician, I believe in the power of statistics, when they are collected correctly and presented well, so while I may quote Disraeli to equate statistics and lies, my point is that when statistics, or any other data is presented, it must be within proper context in order to prevent it from being meaningless, or worse, misleading.

For more information on how to manage and present the data in your business, get in touch.